Dogs of Course, owned and run by Dana C. Crevling, is dedicated to improving dogs’ lives by helping build stronger bonds between dogs and their owners by offering quality educational events and charitable activities. Dogs of Course has been hosting educational events since 1999 for dog training professionals, shelter and rescue volunteers and staff, and dog training, behavior and sports enthusiasts. 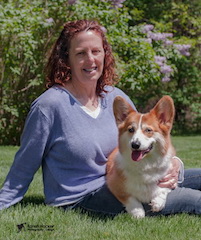 Dana has made working with or for shelter dogs part of her career since 1986. She worked for not for profit animal agencies for 13 years, until 1999, when she started Dogs of Course with the first Instructor Training Course class. Her dedication to improving the lives of dogs and their owners through quality education at all levels was the motivating factor when she started the business and has been the guiding force for all projects she creates.

She started her professional career in dog training at Red Acre Farm Hearing Dog Center. As a trainer and then the Department Director of Red Acre Farm Hearing Dog Center’s training department, she had the privilege (an often daunting task) to screen, select, and train surrendered shelter dogs; turning them into working guide dogs for her deaf clients. Dana was evaluating temperament and matching dogs to their deaf owners long before most shelters ever considered screening dogs behaviorally and using formal systems to increase the odds for proper dog/owner matches. Her evaluation techniques were crude by today’s standards, but looked to flush out many of the same qualities/traits shelters look for including: friendliness; aggression; food, play and social motivation; activity level; stability; breed characteristics; reactions to different stimuli and auditory awareness. As Dana traveled throughout New England recruiting dogs, she became aware of the absence of behavior knowledge and a separation between the humane and dog training communities. Since the 1980’s she has fostered communication and dialog to bring together the professions to benefit homeless dogs. This quest ultimately translated into one of the pillars of the Instructor Training Courses.

Her extensive professional experience in training and behavior also includes animal shelter program coordinator for volunteers, pet training instructor, lecturer, shelter consultant, and Yankee Golden Retriever Rescue’s adoption coordinator/counselor. At YGRR, she screened all the dogs coming into the program, counseled relinquishing owners on all issues including euthanasia, coached and taught new adopters, evaluated dog temperament, trained and supervised volunteers, and placed over 800 Goldens into new families in just 3 years. Through her work at YGRR, she has become particularly interested in the dynamics associated with issues and decisions that separate dogs from their families. 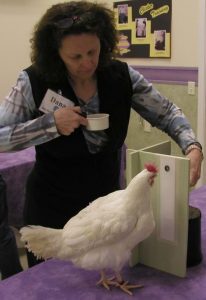 Dana is driven by her thirst for her own personal education. She has attended hundreds of events including seminars, dog camps, chicken camps, courses, and conferences. She has completed Dr. Susan Friedman’s comprehensive professional behavior analysis course, Living & Learning with Animals as well as Natural Encounters Professional Contemporary Animal Training and Management Workshop. Committed to promoting dog training to the public as a skilled profession, she is a member of the Association of Pet Dog Trainers. She passed the first national certification test for dog trainers earning the title Certified Professional Dog Trainer. She also has a B.A. in Business Administration from Babson College.

Dana has been competing in dog sports since 1984, believing in having fun first and building a deep connection with her dogs. She has titled in obedience, field, conformation, earthdog, rally, agility, and Nose Work. Through her interest in agility and quality education, she created and operated an agility summer camp, Competitive Edge Sports Camp (2000-2004) that offered consistent cutting edge training in a small friendly environment reminiscent of children’s sleepover camp. She also joined forces with Clean Run and co-produced Clean Run Camps and in 2007 and 2008, co-produced a conference specifically for agility instructors. Dana is primarily competing in K9 Nose Work at this time and hosting K9 Nose Work camps in collaboration with the National Association of Canine Scent Work.

Dana continues to support charitable organizations by periodically running fundraising events and activities. One of her most successful events was On Course For Kids, an agility fundraiser and social night that benefited the Floating Hospital’s Children’s Cancer Center in Boston, MA. From 2001 to 2006, Dana and the agility community have raised over $305,000.00 for Child Life Services. In August 2010 she hosted the Best Friends Forever Conference that raised funds for St. Hubert Animal Welfare Center’s Capital campaign. More recently, Dana has run a number of small auctions and raffles to support Operation Delta Dog and various animal shelters in regions where her events run. 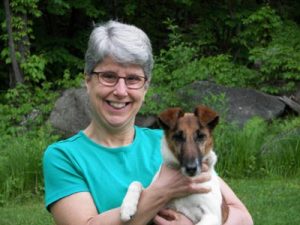 Bonnie Bartlett studied Business Administration at Quinsigamond Community College and Atlantic Union College. She started her career at Data General, in the corporate world. Several years in, she decided this was not the path for her. After some discussion with her husband, Bonnie took the plunge, quit her job and began volunteering as a kennel worker, then training assistant, at NEADS, a service dog training organization.

In 1993, Bonnie had her first Weimaraner who needed a little more training and behavioral guidance beyond her skills. She previously had dogs who must have trained themselves because, miraculously, they were wonderful companions who could go anywhere and do anything. Bonnie started taking classes and private lessons with the Weimaraner, which led to being completely hooked on this “dog thing.”

Bonnie met Dana Crevling in 1999, when she attended Dogs of Course’s inaugural Instructor Training Course class. She began working for Dana in 2000, initially part time, then as Dogs of Course grew, she happily came along for the ride.
Bonnie has competed in dog sports since 1994 with her Weimaraners (2) and Smooth Fox Terriers (3), always having a party while doing so! She has titled her dogs in obedience, hunt tests, tracking, earthdog, rally, agility, Barn Hunt, Happy Ratters, tricks, scent work, and K9 Nose Work. Her first Smooth Fox Terrier was a certified therapy dog through Therapy Dogs International, making weekly visits to multiple nursing homes in the area. Both of her Weimaraners earned Versatility rankings in the Weimaraner Club of America and her current Smooth Fox Terrier has a Versatility Award from the American Fox Terrier Club..

Bonnie was active in training clubs for a dozen years or so, serving on Board of Directors for the Shrewsbury Dog Training Club, agility trial chair at the Weim Club of America Nationals in 2003 and was a member of the LEAP Agility Club, Yankee Weimaraner Club and Weimaraner Club of America and is currently a member of the American Fox Terrier Club.

Bonnie enjoys weight training, cycling, hiking, and camping. She is an avid reader and lover of chocolate. She occasionally participates in walk-a-thon fundraisers and 5k Walk/runs, having walked to raise funds for the Multiple Sclerosis Society, NEADS Service Dogs, Second Chance Animal Shelter and the Vanessa T. Marcotte Foundation.

She shares her home with her amazing husband of many, many years (since 1981) and their Smooth Fox Terrier, Fallon – undoubtedly the best dog ever. 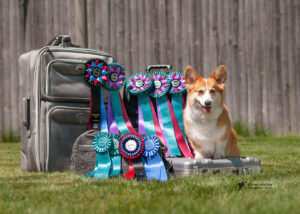 In 2015, Monty was the first dog to earn an NW3 Elite title in three consecutive trials. He went on to be the first Pembroke Welsh Corgi to achieve the title of Elite Champion in 2018 with the NACSW. He is currently retired. 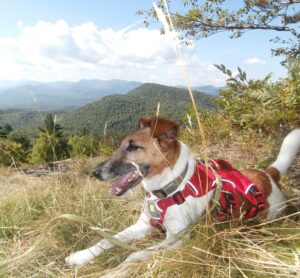 Fallon, Smooth Fox Terrier, enjoys dabbling in tricks, rally, and a bit of agility for fun, but she loves using her nose. She excels in Happy Ratters, has her Rat Master title in Barn Hunt, and plays in nose work/scent work as well. She loves a good hike and camping.

Dogs of Course - Dog Training Seminars, Instructor Education, K9 Nose Work Camps | Copyright 2023 - All Rights Reserved. Site by Sicon Studios.
Cart
Back To Top
We use cookies on our website to give you the most relevant experience by remembering your preferences and repeat visits. By clicking “Accept All”, you consent to the use of ALL the cookies. However, you may visit "Cookie Settings" to provide a controlled consent.
SettingsAccept AllReject All
Manage consent

This website uses cookies to improve your experience while you navigate through the website. Out of these, the cookies that are categorized as necessary are stored on your browser as they are essential for the working of basic functionalities of the website. We also use third-party cookies that help us analyze and understand how you use this website. These cookies will be stored in your browser only with your consent. You also have the option to opt-out of these cookies. But opting out of some of these cookies may affect your browsing experience.
Necessary Always Enabled
Necessary cookies are absolutely essential for the website to function properly. These cookies ensure basic functionalities and security features of the website, anonymously.
Functional
Functional cookies help to perform certain functionalities like sharing the content of the website on social media platforms, collect feedbacks, and other third-party features.
Performance
Performance cookies are used to understand and analyze the key performance indexes of the website which helps in delivering a better user experience for the visitors.
Analytics
Analytical cookies are used to understand how visitors interact with the website. These cookies help provide information on metrics the number of visitors, bounce rate, traffic source, etc.
Advertisement
Advertisement cookies are used to provide visitors with relevant ads and marketing campaigns. These cookies track visitors across websites and collect information to provide customized ads.
Others
Other uncategorized cookies are those that are being analyzed and have not been classified into a category as yet.
SAVE & ACCEPT
× product(s) added to cart → ×
×
Waitlist Please fill in the form below to join our waitlist. We will contact you if a spot opens up for you.